“In a word: INTENSE. From the moves to the setting elements to the playbooks, all of the pieces of the game were constantly ratcheting up the tension, moving us into desperate action and hard choices—exactly the vibe you want from a galactic spy game. At the same time, the addition of THE BOND in 2e added this beautifully human element where we never forgot the person we were fighting alongside.”

— Jeff Stormer of the Party of One Actual Play podcast

Some dedicate their life to the cause...

One day, you will dedicate everything

those who dream of a better world know one simple, terrible fact: not everyone who helps build it will be blessed with the opportunity to live in it. those who put their lives on the line to transmute dreams of rebellion into reality know the grim truth that to see this transformation occur, they may one day have to give their lives as catalyst. going rogue 2e is a GM-less tabletop roleplaying game for 2-5 players that tells the story of that sacrifice.

going rogue was originally developed as an expansion for riley rethal’s Star Wars-inspired Belonging Outside Belonging system, galactic 2e. this second edition of going rogue expands it to a 32-page game that can be played as a one-shot or over the course of a limited-run campaign.

while the base game is built to tell stories of charming, larger-than-life heroes, going rogue 2e—taking its inspiration from Rogue One: A Star Wars Story—uses galactic 2e’s mechanical foundation to instead weave narratives about troubled martyrs mired in messy, ethically gray conflicts who must face the possibility of making the ultimate sacrifice.

hear first edition played on the party of one podcast, roleplaying public radio, and with galactic 2e creator riley rethal on plus one exp or see what is new in 2e here.

going rogue 2e was also featured on dicebreaker, where you can find out more.

to celebrate the release of Andor, for one week only following the 2e launch (sep 22-29) there is also an exclusive bundle available at this link that includes both going rogue 2e and the base game galactic 2e for just $18—for those not satisfied just watching cassian’s story and who want the chance to tell it themselves.

in going rogue 2e, players step into the rebellion being waged by THE LIBERATION to free the galaxy of THE MANDATE. they inhabit one of 5 playbooks that completely replace those offered in the base game, each inspired by a member of one of Rogue One’s main cast : THE SPY, THE LEVERAGED, THE KNIGHT ERRANT, THE CONVERT, and THE LOYAL.

going rogue 2e also offers 3 pillars—or in Belonging Outside Belonging terms, “setting elements”—that supplement those in galactic 2e. this includes THE PARLIAMENT and THE INTELLIGENCE, a deliberate and democratic council and a burdened and decisive network of spies that are locked in a constant battle for the heart and mind of THE LIBERATION. the second edition also introduces THE BOND, a unique spin on belonging outside belonging’s “setting element” mechanic, in which the unfailing trust between THE LOYAL and another player character becomes a discrete element of the setting, introducing new dilemmas and offering a mechanical way to represent and develop that intense relationship.

going rogue 2e also offers 6 additional traits for NPCs, and a unique new clock mechanic known as “fates,” which give players the opportunity to commit to a series of predestined events that THE SPACE BETWEEN—the mystical force that connects all things—has bound the player characters to experience together. in the SACRIFICE fate, players explore the dramatic irony of knowing that before the story’s end, each of their characters will pay the ultimate price, giving their lives to accomplish a vital mission against seemingly impossible odds.

a number of central thematic tensions run throughout the game, offering players the opportunity to explore them in the course of play:

if you can’t afford the game right now, there are free community copies available for download below. anyone who buys at the $13 price point—rather than the minimum $8—and for every $5 above that, a community copy is added to the pool. people who purchase at this level also receive exclusive content from the development of going rogue.

If you would like to review going rogue 2e or use it on your livestream or actual play podcast, reach out via this contact form and we would be happy to provide you with a free copy and the press kit.

“There's nothing like fighting for a cause that seems lost, and no better way to do it than playing going rogue.”
— Tony Vasinda, host of the Plus One Exp livestream

"the most fun i've ever had playing a ttrpg possibly ever—if by 'fun' you mean 'crying about everyone's deaths, just like rogue one'”
—@downloadagoat, playtester

In order to download this game you must purchase it at or above the minimum price of $8 USD. You will get access to the following files:

Support this game at or above a special price point to receive something exclusive.

anyone who buys at the $13 price point (rather than $8) adds a community copy to the pool for those who cannot afford. update: for every additional $5, it will add another copy as well!

they also receive exclusive content from the development of going rogue. this may be of interest to budding ttrpg developers! this content includes:

if you can't afford to pay for this game, feel free to take a community copy.

anyone who buys at the $13 price point (rather than the minimum $8) adds a community copy to the pool & receives exclusive content from the development of going rogue.

I got this game in a bundle but never got around to playing it. But right now I'm listening to the podcast A More Civilized Age's episode playing the game with its creator Jess Levine, and besides being a fun story, the episode does a great job explaining the rules and gameplay of Going Rogue and showing how cool this game is!

(And honestly, Jess did a great job in the episode selling Belonging Outside Belonging games in general; I own several but have never understood the token mechanic, and her explanation was very helpful.)

I don't have many opportunities to play TTRPGs, and my group is currently still slowly working through a session of Anomaly by Sniperserpent that we started last October. But given that the whole group loves Andor and GMless games, I think this is going to be the next game we play, and I can't wait!

Going Rogue is a great game for short adventures in Rogue One inspired narratives.

I made a quick look video about it:

Really glad I got the chance to play this. Super fun and easy to get in to. Mechanics facilitate story very well! Expertly put together.

Absolutely loved this expansion! The convert is a really interesting playbook and everything is really well fleshed out. Feels professional and not a product of a jam 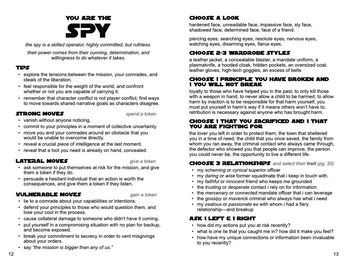 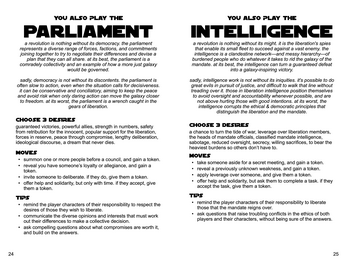 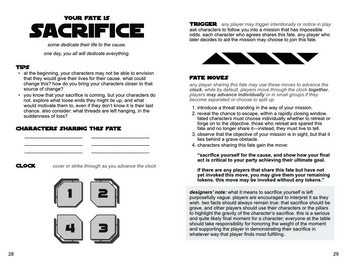 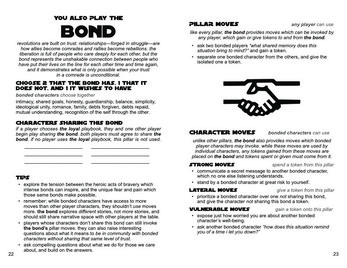 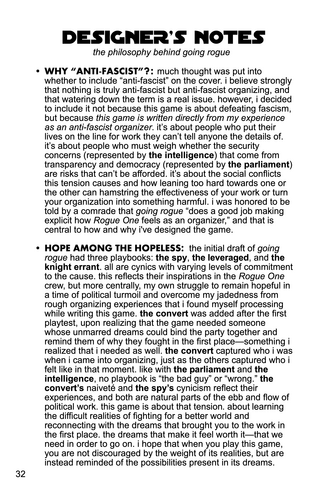