Let’s face it: dueling is sexy.

But do you know what’s sexier than combat? That slower, higher tension duel that occurs before any damage is done—before any blow is even struck. The duel of word and wit, of melodramatic motion and threatening maneuvers. I Have the High Ground is a short, collaborative tabletop roleplaying and storytelling game for 2 players about that kind of duel. It's GM-less and genre-neutral, and takes 1-2 hours to play. You can hear it played on Party of One, The Neon Caster, and Chicks with Dice, read a review in Cannibal Halfling Gaming, or watch this short video by Philippa Mort for an overview of the game!

Using game mechanics inspired by competitive fencing, players choose moves in secret. After their choices are revealed, the winner takes the opportunity to flaunt their bravado or to perform subtle acts that leave an imposing quiet in their wake. Your game is not an action-packed fight to the death but rather a portrayal of the slow, smoldering tension between two people about to risk their pride, their reputation, or even their lives.

I Have the High Ground also encourages players to ask: what exactly is a duel? You might be knights or fencers with your blades crossed for sport or mortal combat. But what if you were hackers vying for control of a contested server? A murderer and the aggrieved loved one avenging their victim? What if you’re assassins and ex-girlfriends, or in a boxing match, or bar fight, or even just a school talent show? So, who will you be? What will you do? There’s only one way to find out.

Pick your weapons, push the limits, and whenever justifiable: flourish your capes.

I Have the High Ground is a GM-less, mechanically light game meant for one-shot play, with just 24 pages of rules text. It can be played in any genre and even adapted to use characters from an existing campaign—it's a great way to zoom in on a tense, pre-battle scene from a game in another system. Inspired by competitive fencing, each round players choose in secret to thrust, feint, or parry. The moves are arranged in a rock-paper-scissors triangle, where thrust beats feint, feint beats parry, and parry beats thrust, scoring one point for the victor. These moves do not, however, translate to the bloody jabs of a sword. Instead, they help structure the narration that follows: thrusts resolve to vicious insults or imperious gestures, feints into provocative bait that incites opponents into emotional vulnerability, while parries resolve as cunning repartees. When one player reaches 9 points, their opponent is defeated, and the loser is forced—in a shameful outburst of emotion—to use their weapon and strike the blow that begins the ensuing battle!

The mechanical victory provides inspiration and structure for the narration that follows. The rules establish who gets the narrative "last word" and how players negotiate their actions so that the loser gives the victor a satisfying chance to demonstrate their victory. I Have the High Ground is a collaborative game. Players are expected to help each other tell the stories they want to tell, treating losses as an opportunity to show their characters weaknesses and demonstrate their opponent's strengths.

Players begin with a combination of open-ended prompts and pre-written options designed to ensure that each character develops into a dramatic foil of their opponent. Players establish a history between their characters, whether that be “rivals”, “ex-lovers”, or both, and select narrative advantages—like the “the high ground”, “superior fashion” or “to be your opponent’s exact type.” Which player selects first depends directly on the most important mechanic: the cape rubric. The player with the finest cape chooses the section of character creation in which they will receive first pick.

You can also hear Jess and satah discuss how playing these games together influenced their design work on I Have the High Ground by listening to their appearance on the Character Creation Cast podcast!

If you would like to review I Have the High Ground or use it on your livestream or actual play podcast, reach out via this contact form and we would be happy to provide you with a free copy and the press kit.

If you want to buy a physical zine of the rulebook, there are a limited number for sale for $15 through Indie Press Revolution.

You can also buy a $45 premium set that includes:

You can hear I Have the High Ground be played: 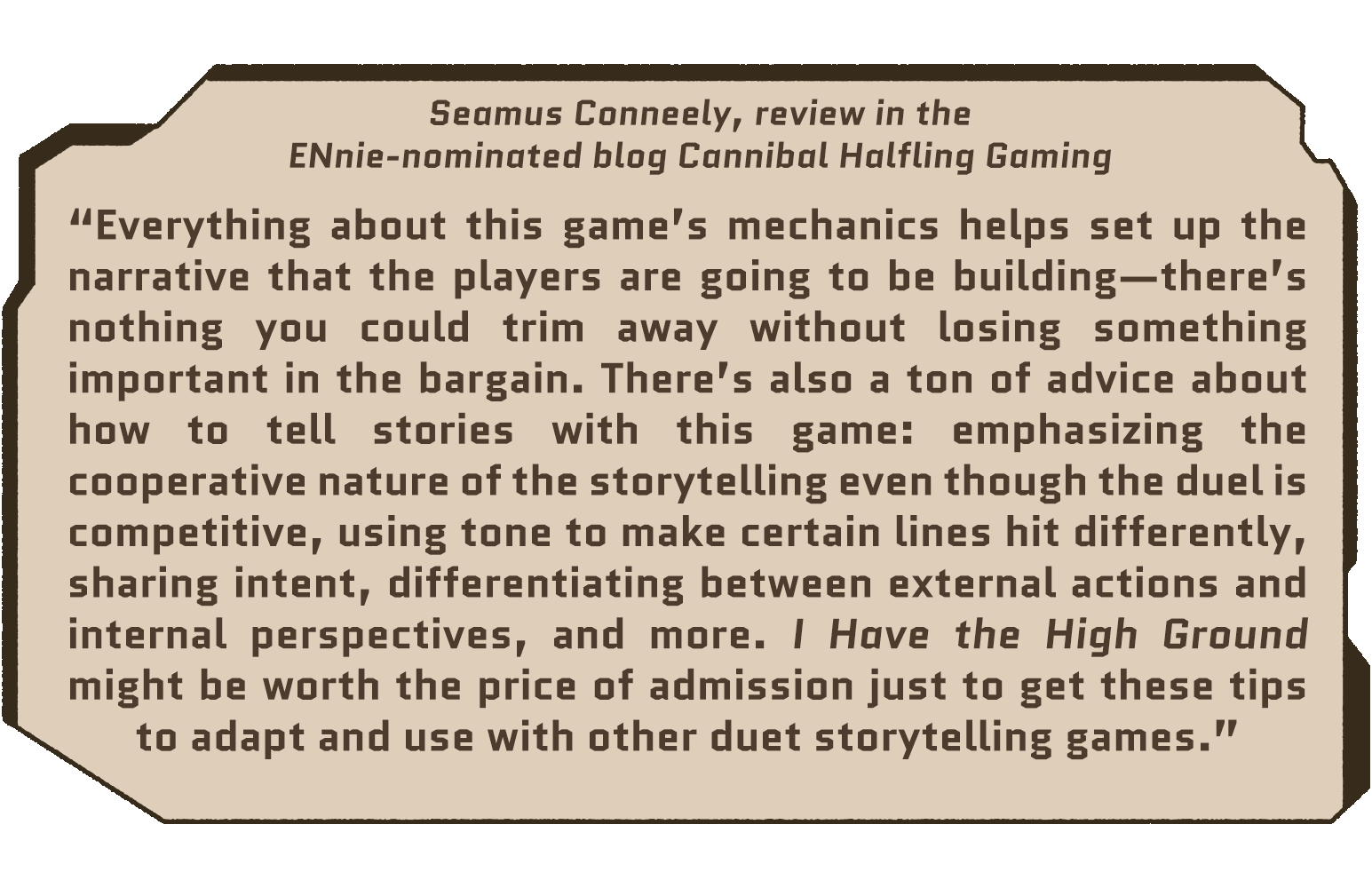 In order to download this game you must purchase it at or above the minimum price of $8 USD. You will get access to the following files:

Support this game at or above a special price point to receive something exclusive.

If you can't afford to pay for this game, feel free to take a community copy. For every $3 someone pays over the minimum price, this adds a community copy to the pool. If you claim a community copy & play the game, it would be much appreciated & very helpful if you could take the time to leave a star review on itch!

By purchasing at $11, you will add one free community copy to the pool to be claimed by someone who can't afford to purchase the game. Every additional $3 will add another community copy!

Necessary disclosure: I was a play-tester for this! I loved it then, and I love it now, and I want you to love it too.

One of the most exciting TTRPGs I've ever indulged in. Modular to a pillar, allowing no end of scenarios within and surrounding one very important core: two people need to fight, very badly, with so much emphasis on the need.

It's a creative wellspring, obviously - and the mechanics are interesting and cohesive towards the story-cause. Rock paper scissors type - feinting, dashing forward to blow, predicting and understanding your opponent further as your violence comes to a dramatic story crescendo and your conflict comes to a close.

I've tried my hand at two instances of this game, and I'll provide these as examples of how you can slice and dice this fun.

#1, THE LIGHT GAME
Suburban superpowers, two wives in unfulfilling relationships, recalling their happier times of long-ago and realizing how much they want to throw it all away and give reckless joy a shot - so they refuse the call, like all scared people do, and duck and weave and duel against one another through this supermarket, en route to buy cheap food items in enormous bulk to secure the most frequent flyer points so they can run away in either direction. Wanna know how their story ends up? Go play it, and go look up David Philips Chocolate Pudding.

#2, DEATH DUEL
A craggy outreach, an utterly soaked vista over infinity in rural Scotland - in a ravaged and wrecked world, where Death has taken material form to take people so much more directly and immediately.

So, obviously, a man with a found family to defend challenges Death himself to a chess game he intends to stall into endlessness. (You may have seen this movie!)

High Grounds leaves room for dialogue, quipping, flourishing and brandishing your Cape a people - a moment of deep and fully legitimate pride, characterization leaving you maximally vulnerable but leaving you, too, maximally distinct and vivid and wonderful.

Sometimes, in these outmatched and uberdesperate duels, being as much yourself as you can is the way to win.

I guess that's my ultimate and final thought. High Ground levels the playing field of fights in fiction to characters thoughtfully and wisely bashing up against each other, with so many modes for tonal direness, utter seriousness, or delightfully goofy levity for gay women bashing swords at each other.

It's an absolute treat. Call this review my 'thrust'!

I fell in love with the concept of this game since my first look at it on the Party of 1 podcast where Jess and Jeff had a go at it.

Duels are a beautiful work of art in fiction. They engage the audience in a bout of back and forth tension, and lead to such interesting character development.

This game is the opportunity for you to fulfill that story yourself, enter that Duel's place in a fictional history as one full of quips and fun hijinks and shenanigans between foes of any ilk. Anywhere from a fun argument between friends to a lethal duel between enemies, this game creates the template for any scenario where 2 people go head to head and the mechanics of Thrust, Parry, and Feint make for a fair and genuinely thrilling experience.

You never know what's going to happen until it does. Find out what happens leading up to your climactic duel, or who wins the argument in a debate on if hot dogs are sandwiches(they aren't). The stakes are yours to set.

This is a great 2 player game with fun ideas and easy mechanics to build tension!

I made a quick look video about it:

Reply
Jess Levine194 days ago
Hey! Here's a short video (from me, the creator!) about making & playing I Have the High Ground and why I'm so excited about it!
Reply
reddyy195 days ago

Really digging this, slightly prep heavy on character creation for me to see it slipping into another system/game though... maybe that's more a reflection of my bad DM'ing lol

I Have The High Ground creates exciting, dramatic stories, sometimes laugh-out-loud funny and sometimes heart-breaking. Play is tense and involving. Capable of handling a really shocking number of genres and situations, this is one of my favorite games that I've played from the last few years.

This game is absolutely everything. Romance lives at the heart of every interaction—in the Byronic sense of romance, and in the relationship sense—and builds a delightful tension as your wordplay escalates to swordplay.

had one game that was star wars dykes being angsty about who's allowed to be a good girl. and another game about gay exes/ex-roommates at a party one of whose weapon was weaponized callouts. 10/10 goty all year 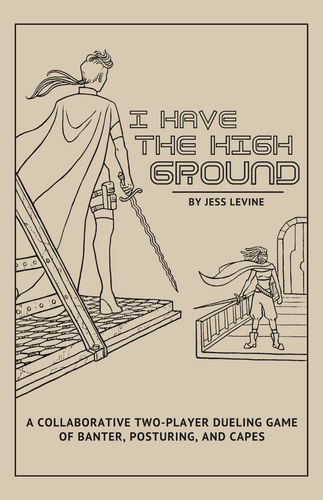 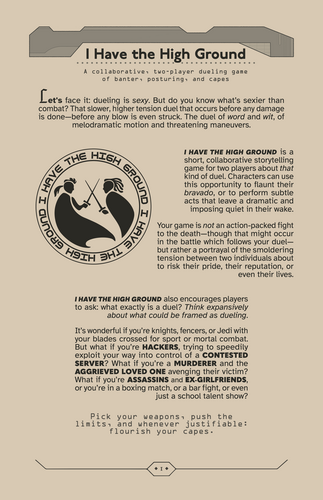 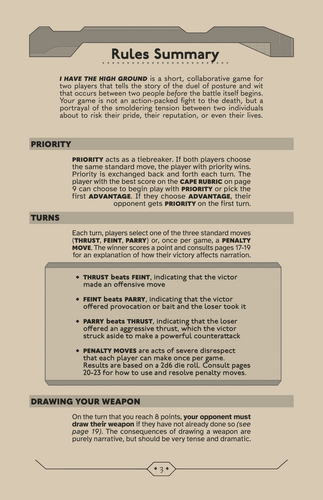 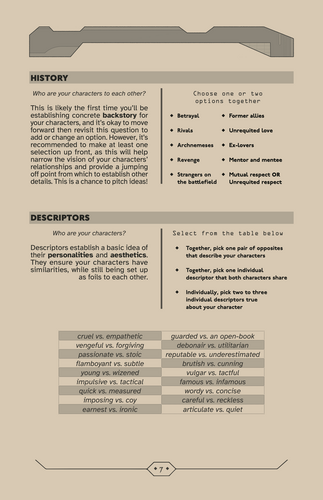 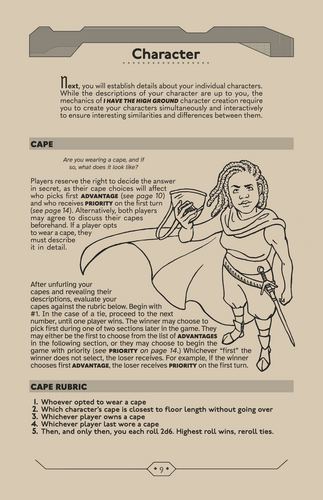 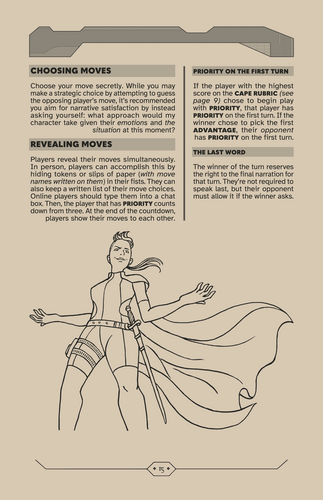